Volkswagen Group of America (VWGoA) today announced the opening of one of the most extensive electric vehicle (EV) charging stations at a North American test facility. This next-generation charging station at its Arizona Proving Grounds will be used to help VWGoA evaluate battery and charging performance under extreme hot-weather conditions. Engineers will also receive real time data to see how various chargers compare.

The 50-space charging station is located at VWGoA’s global test facility in Maricopa, AZ—one of two worldwide, Group-wide hot-weather test facilities—and will allow the charging of EVs in weather conditions up to 120 degrees. Twenty-five DC fast chargers, with variable power outputs from the most commonly used charger power today at 50 kilowatts (kW) all the way up to 350kW, can charge capable EVs at speeds up to 20 miles per minute. Ten Level 2 AC chargers will also be used at the facility to simulate typical, home-based charging. The chargers will utilize charge plugs from the three standard connector types: U.S. (CCS1), Europe (CCS2) and China (GB-T). Pads will also be installed in the future to test inductive charging.  All charging equipment comes from different brands from around the world to maximize testing variability.

“The opening of this charging station means one of the most sophisticated EV testing facilities in the world with some of the toughest conditions on earth will be right here in the United States,” said Dr. Wolfgang Demmelbauer-Ebner, Chief Engineering Officer for Volkswagen’s North American Region. “It reaffirms not only Volkswagen’s commitment to the U.S. market as we bolster our engineering expertise here but also our drive towards an electric future.”

Sixteen parking spots are located under a remote-controlled canopy, which uses awnings to simulate full sun and shaded conditions. The charging station also features state-of-the-art safety controls including a battery temperature monitoring system, developed in-house, that is the basis of the world’s first battery cooling system designed to prevent overheating damage in a serious emergency. A small building in the center of the charging station will allow engineers and test drivers to safely evaluate all testing data without enduring the extreme heat of the Arizona desert.

The charging station was built in partnership with Electrify America, the independent subsidiary of VWGoA that is tasked with building charging infrastructure and electric mobility education. Parallel to the testing of electric vehicles at the EV station, the performance of the charging equipment is tested under these extreme-heat conditions to help improve the performance of the chargers for consumers.

The charging station, along with the related support infrastructure, cost an estimated $9 million. Construction began in early 2019 and was completed in February 2020. The project team announced the final certification this month, and the station is now ready for use. Thanks to co-operation with local power supplier ED3, the project team is working on a concept to provide all the electricity for the station from solar energy in the near future.

About Volkswagen
Volkswagen Group of America, Inc. (VWGoA) is a wholly owned subsidiary of Volkswagen AG, one of the world’s leading automobile manufacturers and the largest carmaker in Europe. VWGoA operates a manufacturing plant in Chattanooga, Tennessee and houses the U.S. operations of a worldwide family of distinguished and exciting brands including Audi, Bentley, Bugatti, Lamborghini and Volkswagen, as well as VW Credit, Inc. Founded in 1955, the company’s headquarters are in Herndon, Va.; the company has approximately 6,000 employees in the United States and sells its vehicles through a network of approximately 1,000 dealers.

“VW”, “Volkswagen”, all model names and the Volkswagen logo are registered trademarks of Volkswagen AG. All other trademarks are the property of their respective owners.

Reposted from Volkswagen Group of America. 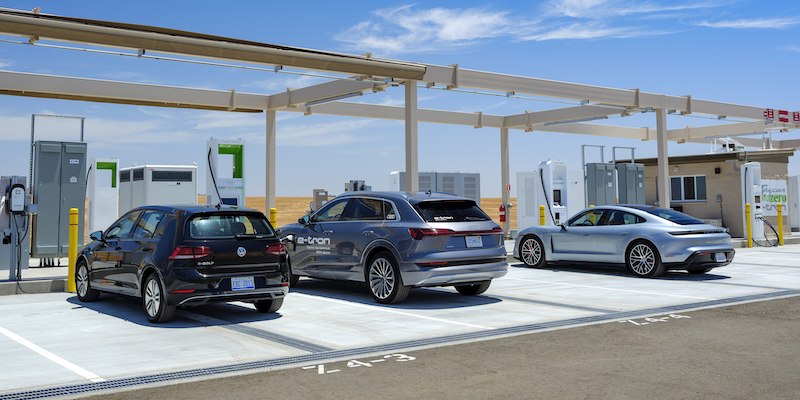