ViaWest Group announced the sale of 20.04 acres of land located at the SWC of John Wayne Parkway and Edison Road in Maricopa for $4,259,440.

ViaWest originally purchased 22.75 acres in November of 2016 for $2,050,000. During ownership of the property, ViaWest developed and ultimately sold a parcel leased by Dutch Bros in December of 2019.

Dutch Bros. was on the Forbes Small Giants: America’s Best Small Companies list in 2017 and has more than 370 stands in the Western U.S.

“The prominent location of the property presented ViaWest with a multi-faceted strategy at the purchase.  Ultimately, we were able to execute a combination of strategies by developing a Dutch Bros. Coffee and selling the remaining land to a retail-centric Developer. This ended up being an excellent land investment,” said Tom Glissmeyer, ViaWest Group Market Leader.

The buyer, Indiana-based real estate firm Thompson Thrift recognized this opportunity and has announced that Sprouts Farmers Market has signed on to anchor the shopping center.

Nathan Steele, Director of Economic & Community Development for Maricopa stated, “This new shopping center is a boon for Maricopa. We are excited that our growing community will benefit from nearly 300 new jobs and an array of quality retail and dining options that this new center will bring.”

The seller was represented by both Brad Douglass from Cushman & Wakefield and Ryan Leavitt of Ventana Commercial. Greg Laing of Phoenix Commercial Advisors represented the buyer.

“We are pleased to have assisted ViaWest and Thompson Thrift in their respective sale and development of this prime Maricopa location.  The community seems very excited about the new retail addition of Dutch Bros and the specialty grocer brought by Thompson Thrift has been long overdue for this area,” said Cushman & Wakefield’s Douglass. 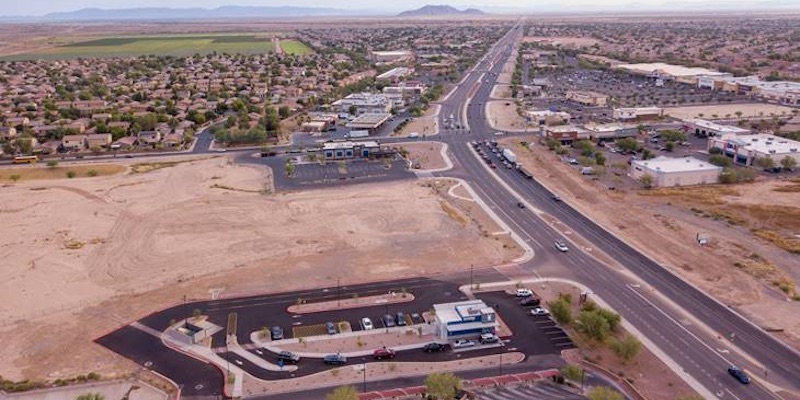