A boom in manufacturing in Arizona – from electric cars to high-end golf clubs – is helping to lower unemployment in the U.S., Gov. Doug Ducey told business leaders this week, noting that manufacturing jobs in the state now outnumber construction jobs.

Ducey, joined by Tom Gilman, an assistant secretary of the U.S. Department of Commerce, spoke Tuesday at the central Phoenix headquarters of golf equipment manufacturer Ping.

They emphasized the opportunities a technical education can provide young people and pushed for Congress to ratify the U.S.-Mexico-Canada Agreement, which the Trump administration negotiated to replace NAFTA.

“Whatever level it is, there’s a job available,” Ducey said. “Here in Arizona, 65 percent of the jobs available could be filled with a career or technical education degree or certificate.”

“We need to educate our people, bring young people into our governments and companies. Investments in education are so important,” he said.

Gilman began his career with Chrysler and worked in private business for more than 40 years before being appointed as assistant secretary for administration of the U.S. Department of Commerce in January. His first job was making engine blocks in Chrysler’s foundry, similar to the foundry Ping uses for its golf clubs.

Gilman and Ducey used the opportunity to promote the USMCA, calling it a better version of the North American Free Trade Agreement, which took effect in January 1994. Mexico approved the USMCA in June.

“We’re proud of the nation’s low unemployment rate,” Gilman said. “But the one thing we do need is the USMCA. That needs to be passed and it needs to be passed quickly. We have basically less than 20 days left in the congressional session. It will grow our GDP by 1.2 percent, it will create 179,000 jobs. It’s been ratified already in Mexico. It’s in the process of being ratified in Canada; they just had an election last week. We need to bring it to the floor.”

Ducey cited Arizona’s close trade relationship with Mexico as a reason to pass the USMCA.

“This is a no-brainer,” the Republican governor said. “I talk a lot about Mexico being our number one trade partner, and it’s not even close, times four. NAFTA is something that happened 25 years ago. I call it a rotary phone agreement. It happened in an absolutely different world and economy. This updates the trade agreement.”

Discussing the manufacturing boom in Arizona, Ducey credited light regulation as a major contributor, saying that since he became governor more than five years ago, 2015, 300,000 jobs have been added to Arizona’s economy.

Ducey said he often talks of low taxes, light regulation, low liability and litigation as being the cornerstones of his policies to support business.

“The one commitment I can make to any decision-maker, leader, chief executive or business owner is we are not going to pull the rug out from underneath you in Arizona. You are going to have a predictable, consistent environment in which to build your business.” 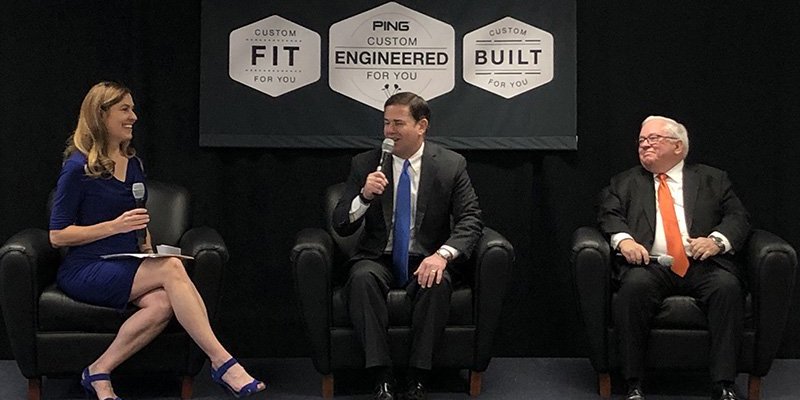