While sectors of Arizona’s economy have suffered financial losses during the pandemic, the state is faring better than much of the nation, according to a leading economist.

If Arizonans can stay masked, socially distanced and sanitized, it has a good chance for full recovery as soon as mid 2021, said the state’s heavyweight economic forecaster, George Hammond, a research professor and the director of the Economic and Business Research Center at the Eller College of Management at the University of Arizona.

“There’s a huge amount of uncertainty about how this is going to all play out and it’s connected to the outbreak and how the virus itself works,” said Hammond, who has been forecasting local and state economies for more than two decades from his university office in Tucson.

Hammond issued his latest projections and talked about how the state has managed to weather the pandemic at a recent webinar, entitled Economic Forecast: Covid 19 Impacts on Arizona’s economy, hosted by the Arizona Chamber of Commerce and Industry.

Among the reasons Arizona is hanging on are jobs and unemployment reports.

In the early months of the pandemic, the nation saw 14.5 percent of jobs lost and has since recovered to 10 percent. Arizona’s is only 5 percent lower than where it was before the pandemic.

Arizona also has a slightly lower unemployment rate. In June, the rate was 10 percent compared with the nation’s 11.1 percent.

Arizona’s healthier data is due in part to being one of the fastest-growing in the country pre-pandemic, and industries like construction and remote retail remain strong. Governor Doug Ducey’s early and gradual reopening of the economy also contributed to jobs and economic growth.

Personal income also got a boost from the bipartisan CARES Act passed by the U.S. Congress in late March to help keep Americans and businesses afloat during the coronavirus shutdowns.

These lifeline programs have helped families pay their bills and put food on the table, Hammond said.

In the first few months of the pandemic, CARE Act programs pumped more than $17 billion into the state’s economy including:

• Increased unemployment benefits: Unemployment compensation recipients in Arizona received an extra $600 tacked on to their weekly benefit of $240 for up to two months. That injected about $8.2 billion into the state, amounting to about 2.4 percent of the state’s total personal income last year.

• The federal Paycheck Protection Program: The program, which provides grants to small businesses to keep employees on the payroll and pay company operating expenses, injected $7 billion into the economy early in the pandemic, representing about 2.1 percent of personal income in 2019.

• Recovery rebates:  Rebates provided another $2 billion to citizens in the state.

Arizona’s economy in the coming months

Hammond also laid out projections for an “alphabet soup” of pandemic recovery scenarios including:

• A 20 percent chance the state will see a rapid V-shaped recovery, where the economy will quickly bounce back from the downturn, then return to pre-pandemic levels by early 2021.

• A 30 percent chance for a W-shaped recovery — the worst case scenario — that would occur if there is a surge of the coronavirus combined with a virulent flu season, forcing the state back into a shutdown and economic distress.

• A 50 percent likelihood for a “Nike Swoosh-shaped,” or baseline, recovery where a bottoming out is followed by a steady and gradual rebound.

“If we can avoid a significant surge in the outbreak as we go through the fall and winter months, I think we’ll continue on a gradual recovery trajectory like a Nike Swoosh type recovery, getting us back to where we were before the pandemic by mid-2021 or in the second half,” Hammond said.

That will depend, of course, on the state’s ability to keep the virus in check.

To watch the webinar in its entirety, go to: Economic Forecast: COVID-19 Impacts on Arizona’s economy. 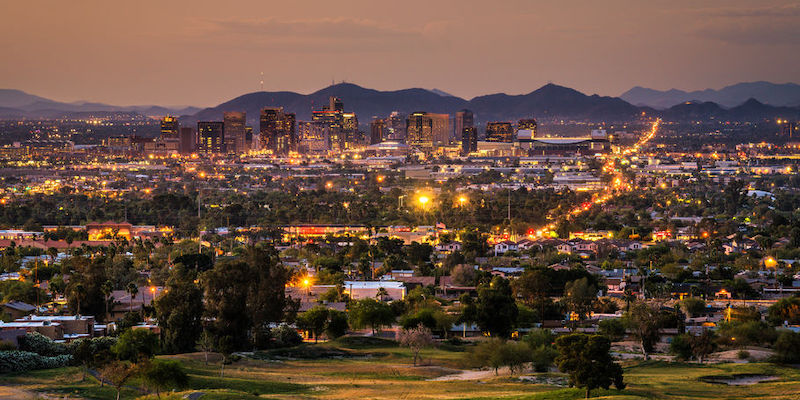