2020 Will Bring New Developments and Construction to Maricopa

As a decade comes to a close, another is just beginning.

Maricopa began the last decade with a population around 35,000 and is entering 2020 with an additional 19,000 Maricopans, a total of 54,700. This is unusual growth, especially for a city with just 16 years under its belt, but most Maricopans know this is not an ordinary place.

City Manager Rick Horst knows how special the city of Maricopa is and some of what’s ahead in the future.

“We’re presently about 2,000 less (people) than Casa Grande, which has been in existence for about 85 years,” Horst said. “We anticipate that, by the time the census is conducted, we will probably be the largest city in Pinal County. So that and all these other things combined — some of the infrastructure we’re putting in, road improvements, bridge improvements, water and sewer improvements — we’re becoming a place of interest to the retail and business community.”

Copper Sky Commercial Area is the main focus of city development in the coming year, with the first phase almost complete. The No. 1 priority, according to Horst, is to get the Senior Living Center up and running. This center will serve seniors in the community who need access to memory care, nursing and assisted living. Groundbreaking for that project is scheduled to take place this year.

This is a separate facility from the Senior Recreation Center, which will take over the current Maricopa Public Library. The new Maricopa Public Library will be 25,000 square feet and will be situated immediately south of Maricopa City Hall and police department. The planning stages for this project are nearing completion and shovels will hit the dirt in February.

Also on the to-do list for the Copper Sky Commercial project are retail and luxury apartments. One of two apartment complexes scheduled to be built in the coming years, this one features many amenities. Groundbreaking on this project is scheduled for the end of this year, with construction into 2021.

“The second phase will probably follow …. which will be some retail and apartments — and these are market rate luxury apartments,” Horst said. “One of the things people don’t understand in our community is that right now we have 23,000 single-family homes and no apartments or condos or townhomes.”

This new housing will provide not only smaller and more affordable rental property, but will also house retail on the bottom level, attracting business and jobs to the city, according to Horst. He even mentioned a futuristic parking garage that will feature a car elevator for easy access. This is all in the name of attracting young professionals to the city.

“The type of people we’re trying to cater to is, entry-level school teachers, firefighters, police officers,” Horst said. “Matter of fact, a lot of people think we’re opening the doors for maybe a bad influence that we don’t want in our community, but that’s not the case.”

The other apartment complex, most recently the center of controversy over parking spaces, is moving forward next to Walmart. This smaller complex will also be situated next to a new school called A+ Charter School, as well as a host of other businesses. Horst named a few, including Bahama Bucks, a new storage facility, a car wash and a gas station.

Road improvements this month along Maricopa-Casa Grande Highway will also tie in to the new developments, with the idea that it will make traveling around the city easier. This, as well as the new traffic signal on Honeycutt and White and Porter roads and the extension of Bowlin Road, should provide traffic relief for the eastern side of Maricopa.

Horst mentioned he’s hoping to pitch another exciting mixed-use project to council in the coming weeks to help beautify the area just southeast of the John Wayne Parkway overpass.

“We’re working on a project called Maricopa Station,” Horst said. “I’ll be meeting with my city council in two weeks and our Strategic Planning (Commission) and after we get their support we’ll roll that out to the public.”

In conjunction to this project, Horst is hoping when the budget for the new fiscal year is finalized in July, there will also be funds for one or two walking bridges over the tracks.

“We will be budgeting for one of the pedestrian passages that will be on the west side of the overpass so the kids can easily get to the high school and those areas,” Horst said.

Horst was most excited for the prospect of finally beautifying John Wayne Parkway, something the city hasn’t had the jurisdiction to do up until recently. After reaching an agreement with the Arizona Department of Transportation, Horst is hoping to create a welcoming atmosphere for visitors entering Maricopa.

“We’ll have a new entry feature coming in so people know they finally arrived in Maricopa and (we’ll be) cleaning up aesthetically. We want to create a sense of place,” Horst said. “People don’t realize that up to 60,000 cars a day drive through that stretch. A lot of them taking the shortcut to go to San Diego. They drive through and the more pleasant we can make it … people will pause and go, ‘Hm, maybe we ought to take a second look at this.’”

As the city enters a new decade of business and residential development, Horst and city officials have high hopes for what was once a tiny town, and is now well on the way to being a thriving metropolis. 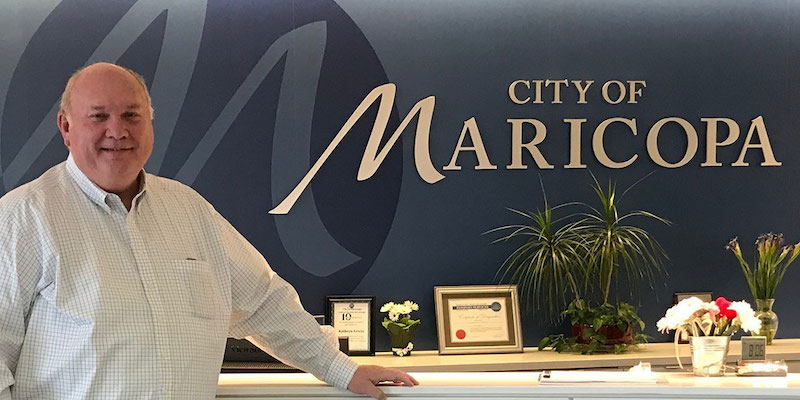