How the Intel $20B Investment Will Transform Arizona Economy

Arizona’s reputation as a technology industry leader continues to grow. In March, Intel announced a substantial expansion of its Arizona-based manufacturing capacity with a $20 billion investment, which includes two new semiconductor fabrication facilities and the creation of 3,000 new high-tech, high-wage jobs and 3,000 construction positions; it will also support about 15,000 additional indirect jobs in the community.

According to Sandra Watson, president and CEO of the Arizona Commerce Authority, Intel’s decision to open two new semiconductor factories is transformational in adding new jobs. “These workers will live in our communities, shop at local small businesses and pay Arizona taxes,” she says. “This expansion will also support thousands of jobs in construction and through suppliers and other industries.”

In addition, Watson notes that the Intel Arizona development represents the largest private sector investment in state history. She explains, “To put that into perspective, this expansion nearly equals what Intel has invested in the state since 1980. Long-term ventures like this have a ripple effect throughout our economy and will have a positive impact on areas such as K-12 education, infrastructure and public safety for generations to come.”

The investment is significant and will add to Intel’s existing operations with about 12,000 employees between two Chandler campuses, and add value to Chandler’s Price Road Corridor, which includes Northrop Grumman and Microchip. “With this investment, Intel is significantly expanding its footprint in Chandler,” Watson says. “When completed, Intel will employ nearly 16,000 Arizonans and will have invested more than $50 billion in our state. Intel will also grow the number of semiconductor fabs they operate in the state from four to six.”

Micah Miranda, economic development director for the City of Chandler, says the expansion represents a huge opportunity for both the city and the state. “It’s a long-term project within an industry that’s producing something locally and shipping those goods around the world. The deal is also important due to the economic multiplier it has; so for every one Intel job created through this project, it will create three additional jobs, and a number of other businesses are supported by the activity taking place.”

In addition, the large number of construction workers who will build the new Intel Arizona facilities will also add to the economic activity in Chandler during that time. “The tradespeople will stay at our hotels, dine at our restaurants and shop at our shopping centers, so those individuals and their spending will help support the businesses most troubled right now due to COVID-19,” Miranda remarks.

Intel is more than just Chandler’s largest employer. Intel in Arizona also prioritizes community through charitable giving. Since 2015, the company and it’s philanthropic arm, the Intel Foundation, have given more than $35 million to support Arizona schools and nonprofits, and thousands of local employees have contributed more than 750,000 volunteer hours.

“Intel has not only been a tremendous economic partner, it has been an exemplary corporate citizen as well,” Watson says. “Over the years, the company and its employees have been leaders in supporting local schools and students, promoting healthy forests and rivers, providing pandemic relief, volunteering and more.”

Miranda adds that Intel is also a major advocate of citywide initiatives with the municipal government and the city’s nonprofit partners. “Intel’s support is not just measured in dollars, it’s also measured in time. The company is an active participant in our Science and Technology Festival, and its employees serve on community boards. Part of the corporate culture is community involvement.”

The Arizona Commerce Authority (ACA) is the state’s leading economic development organization and is focused on key industries, including technology and innovation, to grow Arizona’s existing businesses and create new ones. “Over the last 10 years, the ACA has been laser-focused on making Arizona the leading state for technology and innovation,” Watson says. “As chair of the ACA, Gov. Doug Ducey has been our state’s chief spokesperson and promoter in creating an environment that allows innovation to thrive. We see the results in the exciting new businesses relocating to Arizona; in the companies, such as Intel, that are expanding here; and in the boom of our start-up community, which is attracting worldwide attention for its success. There’s more work to do, and we remain as focused as ever on making Arizona an international center of excellence for next-generation technologies.”

Intel is one of the world’s biggest semiconductor companies, with six wafer fabrication sites worldwide, including its facilities in Chandler. “Across the world, we’re seeing unprecedented demand for high-tech products that are powered by semiconductors. Intel is uniquely positioned to meet that demand, and a big part of its strategy is centered in Arizona,” Watson notes. “Just last year, Intel’s Fab 42 became operational in Arizona, making it the company’s largest chip-making factory in the U.S.; it also is said to be the most advanced in the world. These assets, as well as Intel’s expansion, put Arizona at the epicenter of the technology innovations happening globally.”

Miranda says that with a major capital investment, companies have a lot of location choices, so for Intel to continue to choose Chandler is an honor. “The relationship that the city and Intel have is very intertwined — everything from roadways to utility infrastructure. We collaborated during the design and construction processes of the current facility to ensure that we are well-positioned on the Intel roadmap for future capital investments.”

He adds, “The recent announcement signifies to the private sector that Chandler is not only capable of supporting our largest employer, but because of that support, Intel is comfortable continuing to invest in our area, which the City of Chandler is really proud of.”

The new facilities speak to Arizona’s strength as a technology industry leader. “As a multinational company, Intel could have chosen any place in the world to build its new advanced factories,” Watson points out. “It chose Arizona because of our robust innovation ecosystem, world-class university research enterprise, and highly-skilled and growing workforce. Not only does Intel’s announcement add to Arizona’s already booming tech scene, it sends a signal around the world that our state is the place to be for advanced manufacturing and emerging technologies.”

Another benefit to the city and state is the employees who relocate to Chandler, creating a diverse workforce. “This multifacted community is attractive to other businesses we’re working with, so it adds to the economic success and the cultural dynamism of Chandler,” Miranda says.

Watson comments, “Major investments like this attract additional talent and innovators to the state who add to Arizona’s high-tech ecosystem. As technology companies look to expand or relocate, they want to go where there is already a skilled workforce and robust supply chain that can meet their needs, now and in the future.

“Last year, Arizona was a Top 10 state for tech employment gain, and it is expected to have the third-fastest tech occupation growth over the next decade,” she continues. “Which means more technology companies will be looking at Arizona for their next big investment, and we remain focused on continuing to promote Arizona’s unbeatable value proposition for next-generation technologies.” 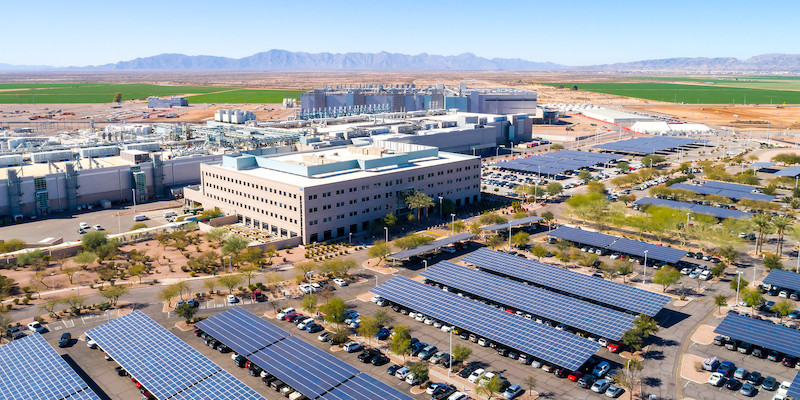