Arizona has rapidly become the hub of electric vehicle (EV) manufacturing in the U.S. In Pinal County, the first phase of Lucid’s Casa Grande plant is complete, and the company will begin producing its all-electric luxury sedan; while Nikola Corp. is building a factory in nearby Coolidge where it will manufacture electric- and hydrogen-powered heavy trucks.

Now, Maricopa County has entered the EV market. On May 15, Vancouver, Canada-based ElectraMeccanica Vehicles Corp. broke ground on its first U.S.-based assembly facility and engineering technical center in Mesa. The $35 million plant will bring 500 high-tech, high-value jobs to the community.

“Arizona is a magnet for auto innovation. We’ve had three EV groundbreakings in the last 16 months, which is incredible,” says Sandra Watson, president and CEO of the Arizona Commerce Authority. “Companies testing their cars at proving grounds in the state include GM, Ford, Toyota, VW, Chysler and Nissan. Arizona is also the epicenter of automated driving. Waymo, Cruise, TuSimple, Embark, Intel and more all have operations here. We hope to continue this momentum.”

Following a year-long nationwide search, which included about a dozen locations in the Greater Phoenix region, Mesa eventually won out over Nashville, Tennessee. “ElectraMeccanica ultimately chose Arizona because of our abundant workforce, and our location with close proximity to California and Mexico is second to none,” Watson explains.

According to Mesa Mayor John Giles, the site offers a number of strategic advantages. “It’s just across the picket fence from a major airport, it’s next to a freeway that will get you to Southern California in half a day, there’s a strong workforce here, and Arizona State University is just a stone’s throw away,” he says.

Paul Rivera, CEO of ElectraMeccanica, adds that the tipping point was Arizona’s accessibility to the company’s target market: the West Coast. “Just the fact that there’s a lot of EVs in Los Angeles, San Francisco and up the coast in Washington and Oregon, made this location ideal for us. It reduces dwell time for vehicles and lowers transportation costs,” he says. “Plus, there are already a Tier 1 supply base and engineering partners coming here because of the other EV manufacturers.” UACJ Whitehall, a leading supplier of precision extruded aluminum automotive components for EVs, recently announced that it will be opening a plant in Flagstaff, while Li-Cycle, a leader recycling of lithium-ion batteries, the type used in EVs, will build a facility in Gilbert.

Situated on 18 acres of land between Phoenix-Mesa-Gateway Airport and the Loop 202, the 235,000-square-foot state-of-the-art ElectraMeccanica complex will include a light vehicle assembly plant, 22,000 square feet of offices and 19,000 square feet of comprehensive research facilities. The company will be producing its flagship EV, the single-seat Solo.

The factory will focus on light assembly, with parts and components produced by the company’s manufacturing partner, Zongshen Industrial Group, in China. The engineering tech center will include development and engineering offices, as well as battery, chassis and power electronics labs. The architect of the plant is Ware Malcomb, and Willmeng Construction is the general contractor. ElectraMeccanica will lease the building from developer MarWest Enterprises.

Chris Camacho, president and CEO of the Greater Phoenix Economic Council, says “This facility is going to be one of the most advanced state-of-the-art OEM facilities in the U.S. And this vehicle is a head-turner.

The diminutive Solo is unlike any other vehicle on the road. Featuring an eye-catching three-wheel design, the tadpole-style commuter car is designed for a single passenger. With a top speed of 80 mph and a range of 100 miles, it will retail for $18,500.

“I think there’s going to be a massive demand for the Solo from consumers as well as restaurants and other businesses that are looking at fleet services,” Camacho adds.

ElectraMeccanica has crafted a three-part strategy for rolling out the Solo. First is a direct-to-consumer approach. Currently, the company is promoting the vehicle at retail kiosks in malls throughout the state. The public can see and touch the vehicle, ask questions and place pre-orders. The second element is fleet and commercial use. Instead of a hatchback, this version of the car features a cargo box. “It’s going to be a homerun for companies that are in fast food, pizza or grocery deliveries; security companies that monitor parking lots and communities,” Rivera says. And the third component will be a ride-share program for residential complexes and college campuses.

Eventually, ElectraMeccanica plans to employ about 500 people at the facility, and it is already hiring for engineering positions. “One of the criteria that the company was looking for was workforce, and that’s a strength in this part of the Valley. These are good, high-tech jobs,” says Giles. Adds Rivera, “Even our assembly line work requires skill because you’re putting together an EV. We’ll be bringing highly skill labor into the facility to develop not only the next evolution of the Solo, but we have other vehicle aspirations as well.”

According to Watson, more EV companies establishing operations in Arizona means more high-wage jobs, which means more economic activity. She says, “It’s also great because people who grow up here can gain training and skills in an advanced industry to get a quality job, all without leaving their community.” 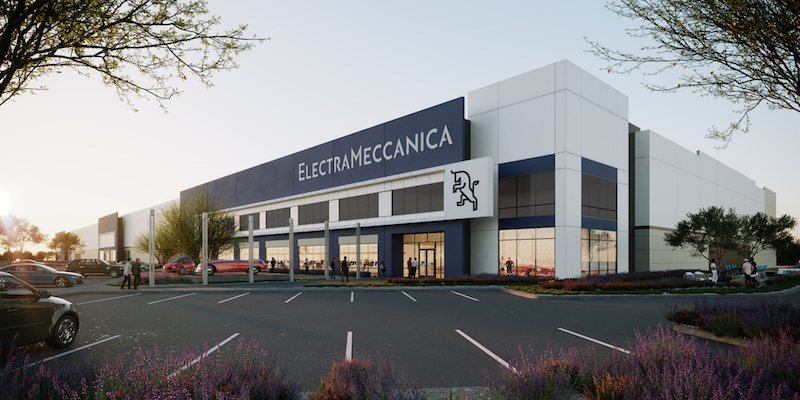