Here’s How Arizona Leads the Way in Aerospace and Defense

Among the many industries in the diverse and thriving technology ecosystem of Arizona, aerospace and defense is the most tenured, stable and successful. During WWII, Arizona began establishing military bases and they are now spread throughout the state. In fact, the government owns more land than the private sector in Arizona and U.S. military bases contribute more than $11 billion annually to the state’s economy, according to the Arizona Commerce Authority (ACA).

Not surprisingly, Arizona’s growth in the aerospace and defense sector coincided with the growth of the state’s military bases. It all began largely because of Arizona’s immaculate weather and clear skies year-round, making it a perfect place for military training and equipment testing. As the military established facilities here, the big defense prime contractors also moved to Arizona to be close to the customers they were supporting. This in turn, prompted the contractors’ own suppliers to move here as well. Eventually, our state became home to one of the largest hubs for aerospace and defense technology in the world.

Today, Arizona proudly hosts major U.S. manufacturers, including Raytheon Technologies, Honeywell Aerospace, Northrop Grumman, Boeing and General Dynamics — all of which have large facilities and even headquarters in the Phoenix and Tucson areas. Arizona is also currently home to more than 1,300 aerospace and defense industry suppliers. These manufacturers and suppliers continue to support the commercial aerospace industry, each branch of the U.S. military and the prominent bases in the state today, including Luke Air Force Base, Davis Monthan Air Force Base, U.S. Army Yuma Proving Ground and U.S. Army Fort Huachuca.

According to the ACA, Arizona is also one of the top destinations in the nation for aerospace and defense talent. The state ranks seventh in overall sector employment and fifth in its manufacturing-specific employment, as well as hosts nearly 58,000 industry workers.

One of the reasons for Arizona’s sustained success in the sector is the technology ecosystem’s ability to innovate across critical key technologies, including 3D printing and Industry 4.0 capabilities. In recent years, Arizona’s technology industry has invested a significant amount of money and research into the development of real-use applications for 3D printing to help manufacturers build lighter but strong aircraft and military vehicle components.

One example is Arizona State University’s partnering with a host of private 3D printing and manufacturing companies in 2017 to launch the Manufacturing Research and Innovation Hub, the Southwest’s largest additive manufacturing research center. The center boasts $2 million in cutting-edge plastic, polymer and metal 3D printing equipment. These efforts are contributing to the evolution of the industry from a model focused on building prototypes to one that uses 3D printing as a valid alternative to many traditional manufacturing processes.

Arizona also has multiple organizations developing Industry 4.0 technologies, which include 5G, IoT (Internet of Things) and advanced automation — all designed to make manufacturing facilities more efficient and lower development and production costs. Benchmark Electronics recently opened its advanced electronics engineering and manufacturing facility in Phoenix, which produces solutions for high-reliability and high-speed electronic systems for aerospace and defense among other sectors. This facility is playing a major role in growing our state’s Industry 4.0 and advanced manufacturing capabilities.

The economic development and technology association community in Arizona is also stepping up to attract to our state more aerospace and defense business ranging from startups to industry leaders. The Arizona Technology Council supports a CEO Network in Tucson that includes nearly every key aerospace and defense supplier in the area. During its more than 12 years in existence, the group has been dedicated to improving the political and economic climate for the industry. The Council also hosts the annual Arizona Aerospace, Defense and Manufacturing Conference, which brings together leaders from around the state to discuss key trends and technology developments here. And the Council also supports an Additive Manufacturing Committee.

In addition, the ACA worked closely with Gov. Doug Ducey to develop the AZSkyTech program, established to position the state as the premier place in the world to responsibly test, deploy and advance unmanned aircraft systems (UAS) technology and policy. UAS and unmanned aerial vehicle (UAV) development and testing is a rapidly growing subsector, and the state is deploying as many incentives as possible to drive it. Ft. Huachuca is home to the Army’s primary testing facilities and range for UAS’s.

It’s also important to congratulate Luke Air Force Base on its own 80-year anniversary. The base was completed in 1941 during WWII and continues to be one of the nation’s premier U.S. Air Force training and tactical command centers. Luke AFB is a primary site for pilot flight training on the F-35 Lightning II. The leaders and individual military members at Luke deserve our endless praise and support for keeping our nation safe. The technology community also thanks them for playing a key role in driving the aerospace and defense industry success in Arizona.

Steven G. Zylstra is president and CEO of the Arizona Technology Council. 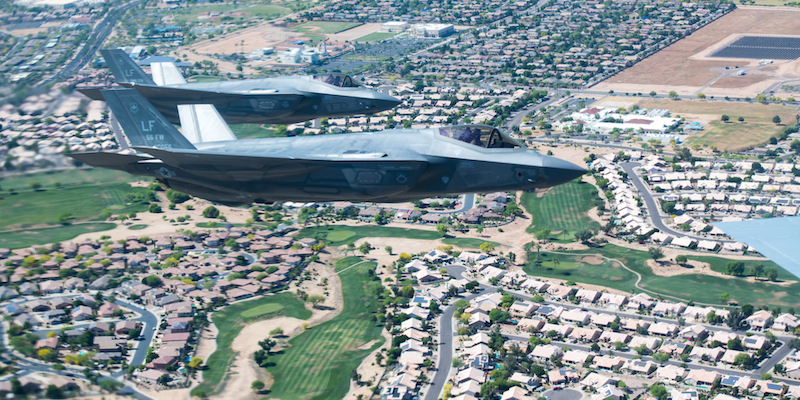