Eye-popping prices and horsepower were matched with reliability after Audi stepped in to buy the maker of exotic sports cars. A ride in the Huracán erases all doubts.

Before Lamborghini was Lamborghini, before it made exotic cars with pulse-quickening engines and stratospheric price tags, and before it ever dreamed of building an S.U.V., its founder built much more down-to-earth vehicles: tractors.

And in between its origin story on the farm in Italy in the 1940s and ’50s and its surprising success with the well-heeled who still want room for groceries, it dueled with Ferrari and unleashed a string of hit sports cars.

Despite the glamour, Lamborghini faced tough financial and sales realities. Even after rolling out both the Miura and the Countach — two of the seminal exotic sports cars of the mid-20th century — the company endured a succession of owners that made poor decisions, missed opportunities and poor quality. In the late 1990s, as much of the European car industry faced upheaval, mergers and outright buyouts, Volkswagen’s Audi brand bought the Italian sports car maker.

It was a match made in German-Italian heaven.

Ferdinand Piëch, the VW and Audi boss, looked past the problems and saw in Lamborghini solid engineering and stellar design. What it needed was leadership, quality control and a financial cushion. For Audi, it was also a chance to jump-start its own foray into the world of ultraluxury sports cars.

Alessandro Farmeschi, the chief executive for the Americas at Lamborghini, spoke at length about how the company had lurched into a future that, over 20 years ago, was quite uncertain.

“For us, change required two things — two things that we luckily already had,” Mr. Farmeschi said. “The passion of people at the company and a great appreciation for speed and all things mechanical. We are also fortunate to be home to a unique region in Italy where great engine design and assembly still reigns.”

But real success in the modern era would require far more than passion and talent.

With Audi’s stewardship, “we were able to build greater attention to processes and product quality,” Mr. Farmeschi said. “Without those, there would be no modern Lamborghini success. We demanded more of the suppliers we used. Even if you design the best possible part, if it’s not assembled and manufactured well, it falls down.”

Consumer expectations have changed, he added: “There were very few companies 10 years ago in what we call the super sport segment. There are many more now, so there is greater competition. These are no longer cars only for weekends. They must be reliable as daily-driven cars.”

Ferruccio Lamborghini started his company’s car-building era in 1963, taking aim at Ferrari. The very first 350GT and 400GT coupes were elegant, with exotic four-cam V-12 engines. And then the industry-changing hits came.

In 1966, Lamborghini introduced the Miura, a magnificently beautiful and forward-thinking road car, with its screaming V-12 engine mounted sideways behind the passengers.

Going from awe to shock, Lamborghini followed the Miura in 1971 with an astonishing car designed by Marcello Gandini. This car was ultimately named by a security guard, who unlocked a small, dark studio where the wood and clay model sat at the factory, turned on the lights and exclaimed in his local Piedmontese dialect, “Contacc!” (Pronounced “coon-tash,” it’s loosely translated as a vulgar form of “wow.”) Several Lamborghini executives were there, and the Countach got its name.

For Lamborghini and Audi, their late-1990s partnership has been paying dividends ever since.

Both the Gallardo from Lamborghini and the R8 from Audi made splashy debuts in the mid-2000s onto the ultra-high-performance stage and gave Lamborghini what became its best-selling and, frankly, best-executed model in the V10 Gallardo (which has evolved into the current Huracán).

The real shock came in 2017 when Lamborghini introduced its Urus S.U.V., which has quickly turned into a sales leader. Now, six of every 10 Lamborghinis built are Urus models, an unthinkable prospect a decade ago. Meanwhile, the quality has never been better, with the Urus, the Huracán models and the bigger, V-12-powered Aventador.

“Despite all the strides we’ve taken recently, reliability isn’t really a driving factor to buy a Lamborghini,” Mr. Farmeschi said. “You buy a Lamborghini because of the status and the style. However, if reliability is missing in today’s climate, it is a 100 percent killing factor, even in this segment. And then you’re not even in the game. Residual value is critical, as well. Even in this very expensive segment, it must be a solid buy and a good value.”

Lamborghini does not take part in reliability studies like J.D. Power or others, but the brand conducts regularly scheduled surveys for customer satisfaction.

“It’s hard for small companies to do those studies externally, but we do have our own satisfaction system that examines product, sales and service,” Mr. Farmeschi said. “Our tight network does monthly polling to look for flags and ask questions with customer ratings from 0 to 10. If a customer rates any issue below 8, we require a detailed report within seven days on the circumstance with input from an auditor, a field representative, the dealer and a product manager at headquarters. Yet, even with this rigorous system in place, our average value on these ratings is now 9.8.”

The proof, however, is in the driving.

Aside from design (and price), Lamborghini has a defining feature: sound. More specifically, the Huracán’s opera you conduct with your right foot. Actually, you first conduct it with your index finger, firing up the orchestra from a covered button in the center console. Most modern internal-combustion-engine cars have become so masked that you hardly notice the very term that defines them: internal combustion. Think about the fact that explosions occur by design at regular intervals inside these aluminum cases. In the Huracán, there’s absolutely no doubting that stuff explodes inside those 10 cylinders.

All that noise wouldn’t mean a thing if it didn’t put out, and indeed, the Huracán Evo puts out. From 5.2 liters, all of its 631 horsepower is on tap at a motorcycle-like 8,000 r.p.m.s, as is 442 pound-feet of torque at 6,500 r.p.m.s, itself a speed at which most car engines run headlong into their electronic rev limiters to prevent pistons from seeking daylight.

But toe your loafer into the throttle and all of your problems disappear. Except, perhaps, for the bill involved and the minimum of $287,400 you just spent on yourself. The Evo can launch you to 60 miles an hour in 3.1 seconds, officially, and onward to a top speed of 202 m.p.h., though Car and Driver measured one Huracán Evo Coupe at just 2.5 seconds to 60 m.p.h., so the factory’s numbers might very well be modest.

And the magic extends to the immediacy of the Huracán’s steering and suspension. In corners, transitions and on the track, it feels like a giant go-kart. Huge carbon ceramic brake discs slow things down from extralegal speeds at eyeball-straining rates. Prescriptions of Zoloft would plunge if a few laps in a Huracán could be widely distributed.

Lamborghini has revised the Huracán’s interior, which now uses a fully modern touch screen at 8.4 inches across to replace the old litany of buttons splayed across the center console, showing some visible Audi influence, which is a good thing. As for the car’s convertible top, it stows in just 17 seconds, and can also perform this bit of street theater at up to 31 m.p.h. (If you’re ever at such a low speed for that long.)

And now that the Lamborghini opera opens with the new Urus — which does normal S.U.V. things very well at a Lamborghini price — it grants the company even more license to unleash the bonkers with the Aventador and Huracán.

In a way, delivering street theater is what Lamborghini has always done. But since Audi’s partnership has yielded real results, that theater’s lights don’t flicker, the curtains always glide open, the props always work, and there’s no fear of understudy mediocrity.

A version of this article appears in print  on April 3, 2020, Section B, Page 4 of the New York edition with the headline: How Audi Taught Lamborghini Quality.

Reposted from The New York Times. 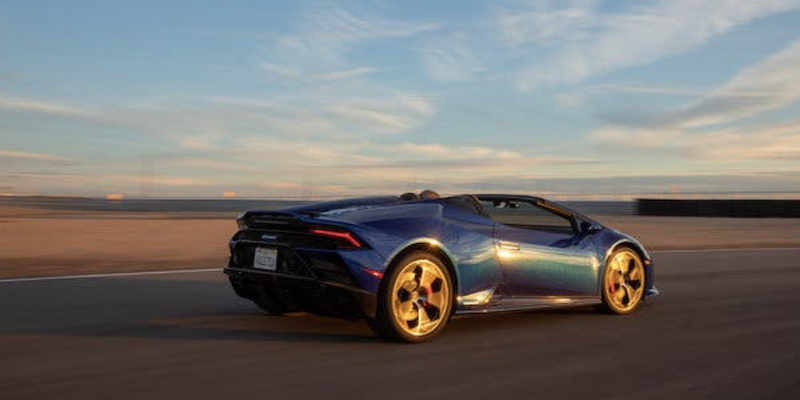 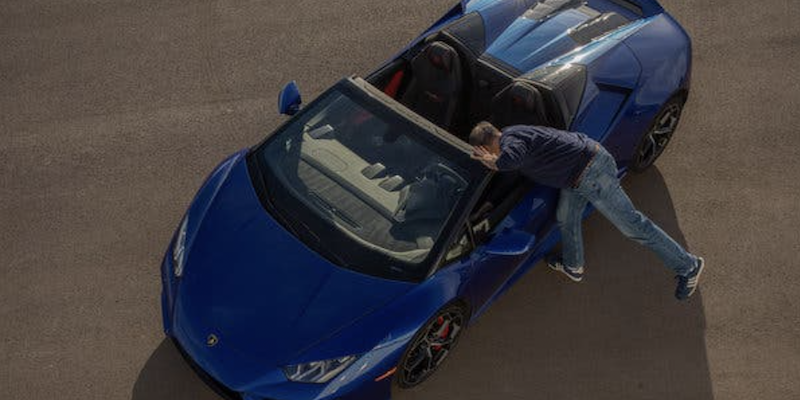 Above: Lamborghini’s purchase by Audi two decades ago brought a new focus on quality to go with its extravagance.
(Photo by Caitlin O’Hara for The New York Times) 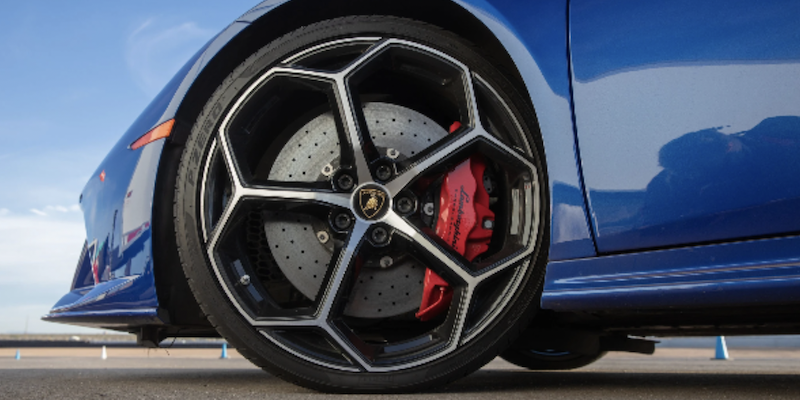 Above: Carbon ceramic brake discs slow things down a blink.
(Photo by Caitlin O’Hara for The New York Times) 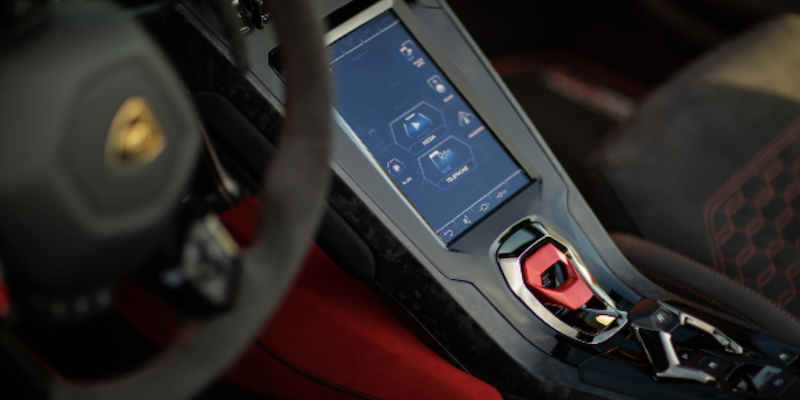 Above: A button in the center console fires up the engine.
(Photo by Caitlin O’Hara for The New York Times) 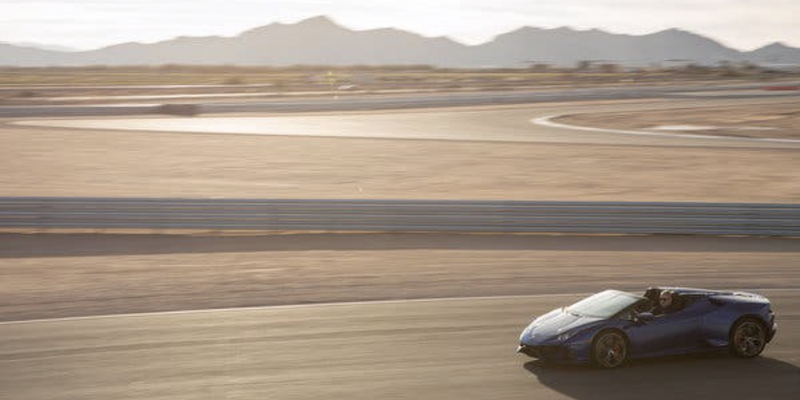 Above: Test-driving a Huracán at the Apex Motor Club in Maricopa, Ariz.
(Photo by Caitlin O’Hara for The New York Times)